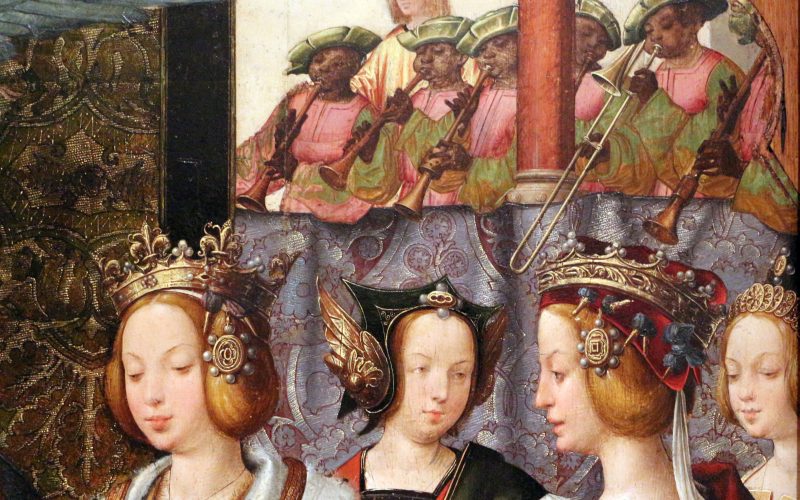 Those of us who love period films and television often get a whitewashed version of history. We watch scores of movies and shows that are totally devoid of people of color. We’re treated to an abundance of white people decadently dressed as nobles, clad in rags as peasants, peddling goods as merchants, and playing every character in between. While it’s never advisable to take adaptations of fairytales like Ever After or historical fiction as serious sources of information, it begs the question — why don’t these productions try to make their sets more realistic?

That’s a loaded question with complex answers that would take pages to explore. But what we will tell you — in a shocking twist that shouldn’t be shocking and isn’t much of a twist — there were indeed people of color living all over pre-modern Europe. We just rarely read about them in school or see them represented in popular culture. And that’s a disservice to history lovers everywhere. When you’re an armchair time traveler, you want to get the details right.

So we’ll set the scene: picture a medieval European world with people of all stations, shades, and creeds. Think Spain, Austria, Switzerland, France, Germany, Portugal, England, and more. These people of varying skin colors live and work together, experience plagues and food shortages together, drink and play games, cook and clean, and all the rest.

Sometimes they lived in harmony, sometimes not. Regardless, newcomers poured into Europe from all over the globe over hundreds of years. They came as traders, explorers, laborers, and warriors. They may not have made up the majority, but they were most definitely present. Here are just a few examples of people of color living in pre-modern Europe.

One of the most familiar conquests might be the Moorish occupation of Spain. It began in 711 when Tariq ibn-Ziyad led his African army across the strait of Gibraltar to invade the Iberian Peninsula. The intention was to intervene in a Visigothic civil war. After a decisive victory, ibn-Ziyad joined forces with Musa ibn Nusayr, an Arab general. Over a seven-year campaign, they brought much of the Visigoth Kingdom under Muslim rule.

The Moors ruled Spain for over 800 years after that. They introduced scientific instruments like the astrolabe and fostered progress in chemistry, physics, astronomy, geography, and more. Novel crops like fig, sugar cane, ginger, and saffron flourished. Muslims, Christians, and Jews lived in relative harmony for a brief period before inevitably clashing again. Judging by the standards of the time, Muslim tolerance for rival faiths like Judaism and Christianity was relatively benign, though far from ideal.

Eventually, Moorish rule declined. By the 1500s any remaining Spanish Muslim was required to convert to Christianity or else suffer brutal consequences. The Moors left an indelible impression on everything from architecture and academia to cuisine. That legacy is still evident today in both Portugal and Spain.

Born in Thebes in 250, Maurice was an acknowledged Christian about 60 years before Christianity would become the official religion of the Roman empire. Still, he was able to navigate within a Roman society with differing views smoothly. He was a learned soldier and natural leader, and when he joined the Roman army he rose through the ranks.

He eventually came to command over 6,000 Egyptians, many of whom were Christians, in the Theban Legion. In a story recorded by 5th-century French bishop St. Eucherius, a soldier named Maximian appealed to Maurice for help putting down a peasant revolt in Gaul. Maximian was another brilliant military mind. The Emperor, Diocletian, put him in control of land west of Milan, and so he summoned Maurice to Octodurum (now Martigny, Switzerland).

He needed Maurice’s forces to clear out the peasants, who were fellow Christians, using brutal Roman tactics. They refused and withdrew to Agaunum in protest. At first, Maximian had one in every ten men there executed. When that didn’t work, he did it again. Still, the Theban Legion wouldn’t budge. In the end, they chose martyrdom — Maximian had every soldier, including Maurice, put to death. Agaunum is named Saint-Maurice d’Agaune in his honor.

Anyone familiar with the legendary tale of King Arthur knows his Knights of the Round Table. Strong and loyal, these men lived by a code of chivalry. They swore to never partake in murder, cruelty, heresy, or the mistreatment of women. The most popular are probably Lancelot, Percival, and Gawain. Depending on what stories you’ve read, you’ve either come across around 25 valiant knights or a whopping 150. Among them was Sir Morien.

Morien’s saga comes from a 13-century tale that begins with his conception. His father Aglovale, a Knight of the Round Table, fell in love with a beautiful Moorish princess while searching for Lancelot. The couple declared their intention to marry, but Aglovale couldn’t abandon his quest. He left her pregnant, promising to return.

Morien grew up tall, strong, handsome, “black of face and limb,” and uncommonly talented in combat. When his mother was stripped of her lands, he went in search of his father to set things straight. Morien found Lancelot and Gawain and regaled the tale of his birth, father, and mother’s predicament. After a little squabble with Lancelot, they agreed to help him. Of Morien, the author says:

“He was all black, even as I tell ye: his head, his body, and his hands were all black, saving only his teeth. His shield and his armour were even those of a Moor, and black as a raven…”

After showcasing his exceptional combat skills, Morien swore an oath of loyalty and became a knight himself. By the end of the tale, he’s reunited with his father. Aglovale travels to the land of the Moors to finally marry his betrothed and take back her rightful lands.

It can be tough to track down instances of people of color living in Europe during times like the Tudor era. But thanks to parish records, we know of Mary Fillis. Born in 1577, she arrived in London at a young age to work as a servant in the home of a man named John Barker. She named her father as “Fillis of Morisco” a Moorish basket weaver and shovel maker. They were likely from Morocco.

Mary came to England to work in a household that already employed several Africans. She was skilled enough to eventually leave the Barker house and move in with a seamstress named Millicent Porter. Porter encouraged her faith and helped arrange her baptism at St Botolph’s Church in Aldgate. A handful of people attended the ceremony, attesting that she had a solid amount of supporters in her endeavor.

Mary may have been Muslim before she came to London, but she was so young that she likely barely remembered it. To live in a highly religious, post-reformation Tudor society, one had to toe the line when it came to faith, especially as an immigrant. Mary was one of dozens of converts of African descent during the period.

Every king must have music in his court, and Henry VIII was no different. John Blanke appears on a 60-foot-long vellum manuscript known as The Westminster Tournament Roll. Henry commissioned it to depict the celebration held for the birth of his doomed male heir, Henry, Duke of Cornwall. It shows Henry predominant in the center, surrounded by footmen, dignitaries, nobles, officials, and six trumpeters dressed in full livery. One of the musicians sports a head covering in both his depictions.

According to historians, that man was John Blanke, the same “blacke trumpeter” noted in the treasurer’s accounts. Some posit that he was born in North or West Africa, or else in southern Europe to African parents, and came to court via Catherine of Aragon’s retinue.

These accounts note John’s wages as a sum of 20 shillings a month in 1507 through 1508. They also show John successfully petitioning the king for a double pay raise, leaving us to surmise he was a talented player. He was not an anomaly, either. Black drummers and trumpeters have been recorded in other Renaissance courts and households, like that of King James IV in Edinburgh and Cosimo de’ Medici.

John married in January of 1512. He received a generous gift from Henry in the form of a bonnet, hat, and gown of violet cloth. Nice trumpeting work, John.

A “singlewoman” living in a small South Gloucester village, Cattelena prospered in rural England until her death in 1625. Her name suggests she emigrated from Spain or Portugal. She might have originally come in a servant’s capacity, but by the time she lived in Almondsbury, she was selling dairy from a cow she owned.

She had an inventory of quite a few possessions, including cutlery, bedding, cooking utensils, a pewter candlestick, and clothing. The lack of furniture suggests she shared her home with someone else, possibly a widow named Helen Ford. Her autonomy is a breath of fresh air in a sea of stories about the ownership of people, rather than people owning things themselves.

This is just a tiny sampling of people of color living in Europe during periods that often leave them out. Whether mythical in sweep or more down to earth, they were there. In armies, stories, and as individuals. As we move into the future, let’s hope we keep portraying the past with that in mind.