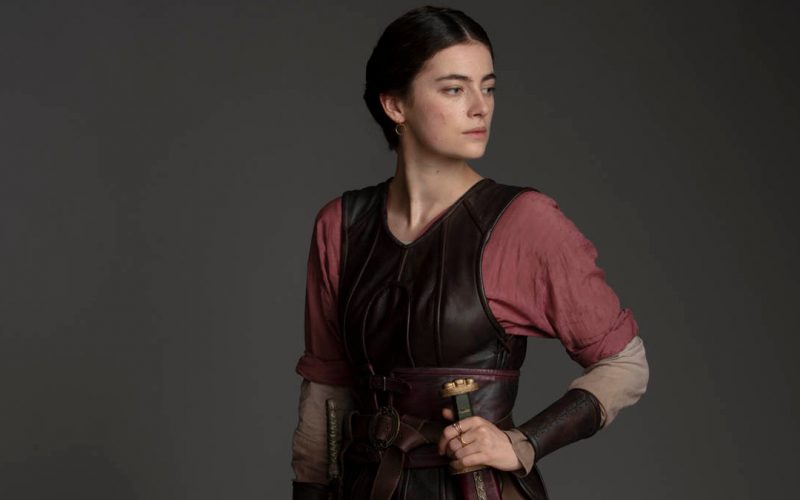 “A queen by title, but in deeds a king.”

We’re first introduced to Aethelflaed, the future iron lady of Mercia, in the first season of Netflix’s The Last Kingdom. A shy, blonde child who recoils at the mere sight of the show’s hero Uhtred, she was raised, most likely by her pious mother Aelswith, to fear the heathen her father King Alfred despised and respected.

By the second season, Aethelflaed has undergone some miraculous changes. She is suddenly a much older brunette who is not only unafraid of Uhtred, but seems to have something of a crush on him. Since she is no longer an infant, medieval tradition states that she must be married off to a suitable (read: rich and powerful) match. That lucky man ends up being Aethelred, Lord of Mercia and supreme jerk.

Up until this point, Aethelflaed’s life has been pretty tame. Her typical day is filled with rounds of strategy games with her King/Dad, sword fights with their bodyguard Steapa, and giggling at her shady cousin Aethelwold’s jokes. She is sweet, smart, cultured, educated, and ever ready to serve Wessex and her family.

The Best Is Yet To Come (Undone)

Things start going downhill for the future Lady of the Mercians beginning with her wedding night. She spends her days being terrorized by her cruel new husband, and when he leaves to wrest London from Danish control, the jealous lord demands she come along.

Upon their arrival in London, Aethelred is promptly outsmarted by Viking brothers Erik and Sigefrid, who capture Aethelflaed and take her hostage. While captive, she falls in love with Erik thanks to a handful of cute, if bland, exchanges (or Stockholm syndrome, either way), and becomes pregnant shortly after. In a battle that ensues during a botched rescue attempt by Uhtred, Erik dies and Aethelflaed kills Sigefrid in revenge. Her husband sees her do this and to him, it confirms her infidelity.

He hates her forever after that, refuses to recognize her child Aelfwynn, and does annoying things like taunt her about her dying father and attempt to have her assassinated. Typical husband and wife stuff.

Back in Mercia, Aethelflaed pulls her weight, inspiring and rallying civilians and troops while Aethelred hangs out with his falcon, complains, and hooks up with servant girls. With the help of Aldhelm, her husband’s right-hand man turned traitor, she evades assassination attempts and escapes to a nunnery. While there, she is cornered by the Danish Haesten, who blames her for the death of his lords Erik and Sigefrid and wants her dead.

After a nun gets speared (thanks, Dagfinn) and a few hostages die, Aethelflaed escapes with the help of Uhtred yet again. She returns home and continues to rule with dignity and grace, earning the respect of the Mercians and basically everyone else. She also enters into a not so secret affair with Uhtred.

When her husband dies, the Mercian witan votes her in as temporary ruler after Uhtred declines the throne. She and her brother Edward (who is now king) forge ahead in continuing their father’s dream of a united England.

Did Any Of That Actually Happen?

Not for the first time, a television series has taken to glossing over some of the most interesting things that happened in a historical figure’s life in favor of fabricated storylines — that Danish love affair never occurred.

However, The Last Kingdom does get many of Aethelflaed’s personality traits right, from what we know of her. In the show, her character is correctly portrayed as being highly respected and loved, a gifted strategist, and an eventual ruler of Mercia, although there was no one named Uhtred Ragnarson involved in her ascension.

Born circa 870, Aethelflaed was the eldest child of King Alfred the Great and his noble Mercian wife Ealhswith. She was likely raised at court alongside her brothers, learning vital skills she would later employ expertly against the Danes as a ruler of Mercia.

She did indeed marry Aethelred, the ruler of Mercia, in a bid to strengthen the bond between the two kingdoms. The two had a child named Aelfwynn, and it is believed that Aethelflaed nearly died during her birth and resolved to have no further children.

There is no evidence that Aethelred treated Aethelflaed as poorly as his character does on TV. The two may not have been madly in love, but they ruled together well and presented a united front. The pair co-issued charters that attested to their collaborative efforts to strengthen their kingdom, including building fortifications and supporting religious endeavors. Their daughter was also involved in these political machinations, suggesting that she was taking on the role of heir.

Aethelred’s health began to fail a few years into the 10th century, and it seems that Aethelflaed took up the mantle as a de facto ruler. The Irish Annals recount an instance in 907 where a Norwegian Viking called Ingimund journeyed from Ireland with his troops to ask her — not her husband — for land to settle on. The Annals refer to her as “The Queen of the Saxons.” Despite the fact that her brother Edward was over in Wessex styling himself as “King of the Anglo-Saxons,” it seems not everyone was on board with that.

Historians have had to gather much of what they know of Aethelflaed from sources other than the Anglo-Saxon Chronicle, which serves as the main source for the period. Written in Wessex during the reign of Edward, it takes great pains to exclude Aethelflaed’s achievements from history in what some have called a “conspiracy of silence.” And her achievements were numerous.

In Deeds A King

After Aethelred succumbed to his illness in 911, Aethelflaed succeeded him as Myrcna hlædige, or Lady of the Mercians, in a relatively smooth transition. It’s a testament to her great influence and success as a leader that not only did the nobles surrounding her agree to elevate her status rather than depose her, but that something like this could happen during this period at all. Women simply did not rule.

Aethelflaed puts many of her contemporaries, predecessors, and successors to shame. Her reign was an overwhelming success. Using her impressive ingenuity, she led her army to thwart the Danes during The Battle of Chester, a conflict started by the aforementioned Ingimund, who was unsatisfied with the lands she had granted him a few years prior. The Irish initially supported him, but soon switched sides — just because Aethelflaed sent them a letter.

She oversaw the construction of a string of burhs, defensive structures that doubled as carefully planned towns. She did this while repeatedly fending off Viking attacks and governing an entire kingdom. When a Mercian abbot was murdered during a diplomatic mission to Wales, she responded by raising an army and marching there within three days.

It was around this time, at the height of her success and in her mid-thirties, that she died suddenly while at the Mercian capital Tamworth. Edward just so happened to be there visiting with a retinue of soldiers at the same time. What a coincidence.

Edward immediately occupied Tamworth after Aethelflaed’s death. The same chronicle that explicitly ignores much of her achievements goes on to record that all Mercians subject to Aethelflaed submitted to Edward, along with the Welsh. Funnily enough, the Mercian record of things mentions nothing of the sort happening.

Aethelflaed’s daughter succeeded her (another unheard of chain of events in medieval times) but was deposed by Edward within a few months and taken to Wessex. She disappears after that. Edward’s scribes wrote of a seamless transition of power, but that was likely not the case.

Such was the loyalty to Aethelflaed and her family that pushback was inevitable. Many Mercians opposed domination by Wessex and Edward had to occupy Mercian lands with his military to maintain the annexation. He experienced resistance for the remainder of his life.

Despite history trying to erase her, Aethelflaed remains a towering figure. Like her father, she was an intelligent ruler who navigated crises with grace and ingenuity. Her subjects were extremely devoted to her and her legacy endures to this day.